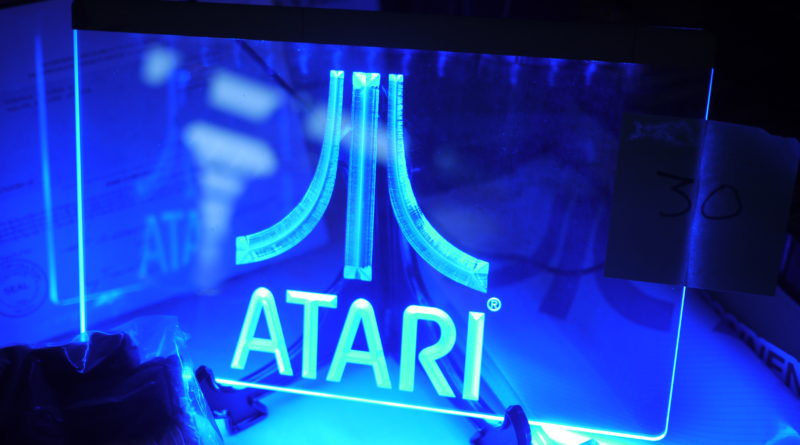 The ejagfest is one of the most important dates in the Atari calendar. In 2015 it took place in Kleinenbroich near Mönchengladbach. With heavy luggage I went to the North Rhine-Westphalian province and came back a bit lighter.

The luggage consisted of a Jaguar, Lynx II, notebook and the FireBee. The latter went back to its owner (Johannes Hädrich from atari-home, thanks for the loan!). At the ST Computer table visitors could play the best Jaguar fighting game, Ultra Vortek, and on the Lynx Alpine Games was running. Fortunately, the ejagfest organisers provided TVs on request. Those who were there by car and still needed a tube TV could even take one with them. Of course, various issues of the ST-Computer were also available.

The event was held in one large room and the hallway. In terms of exhibitors, there was, as usual, a mix of developers, retro fans and collectors and some retailers. The stand of Marco Willig alias “McWill” attracted special attention. Willig offers a VGA mod for Lynx I, II and Game Gear, optionally also with VGA interface for connection to a monitor. Modified devices could be play-tested at the ejagfest, several Lynx consoles were handed in to him. The conversion is quick and the Lynx II looks as good as new afterwards. The only optical flaw: the involuntary edge smoothing caused by the low-contrast display is of course completely absent from the sharp VGA display. Scaled to native VGA resolution and with a much sharper display, it is only noticeable how pixelated the old games were. On the internet, owners of a Nomad, Turbo Express and Neo Geo Pocket are already demanding a VGA conversion for their devices.

Probably most active Lynx players will have their console converted sooner or later. For the collection, a second Lynx without a VGA mod will be purchased for the display case.

Presumably untreated museum pieces were on display at ejagfest in the retro corner: Video Pinball, Atari 2600 in several variants, Ultra Pong, Pong, Super Pong, Super Pong Ten, TouchMe, Lynx I and II, Stunt Cycle, Portfolio, Atari 5200, 7800 and, almost as an exotic in the exhibition, an Atari Stacy. The space could probably be filled with these consoles and computers alone if each one had been connected to a television set. A small collection of exotic Japanese hardware from the team at Videospielarchiv.de invited visitors to try it out. Sharp’s Twin Famicom, a licensed version of the Nintendo Famicom (here: NES) with an integrated floppy disk drive, and the Family Computer keyboard should be familiar to many Nintendo fans; the Tomy Tutor, a computer from 1982 that used a 16-bit CPU like the TI-99/4A, less so.

Even more exotic was Gakken’s Compact Vision TV-Boy with a T-shaped controller and a start button integrated into a kind of handle. Only a handful of games were released for the system, but Gakken is still active today: The company is known in Japan for its “Otona no Kagaku” series, in which a 4-bit microcomputer, a theremin and an electric guitar including amplifier have already appeared. Epoch’s Cassette Vision, on the other hand, seemed almost conventional, with two knobs per player permanently integrated into the console.

In contrast, Nintendo’s Pong clone consoles, which were sold exclusively in Japan, were a success in the millions. “Block Kuzuishi” from 1979 is nothing but Breakout.

Other exotics at other tables: The revised version of the NES that only appeared in North America and Australia, that Model 101 (“toploader”), Panasonic’s 3DO, and a NUON DVD player from Samsung, with five games.

Back to the mainstream, and at ejagfest (and only at ejagfest) that consisted of the Jaguar including a CD attachment. So if you want to stand out here, you have to come up with something more: A ProPad with six buttons is a good start, and a Battlesphere is always an eye-catcher. Even the cartridge version of “Alice’s Mom’s Rescue”, released just before the ejagfest, was in at least one Jaguar. The module is already sold out, those who were still lucky enough to get one could pick it up at Nick Harlow’s (16/32 Bit Systems) stand.

How else can the Jaguar stand out? With a different case: just like at ejagfest 2014, the Jaguar was available in dental white and as a GTI Edition – the instructions for the Jaguar “Wolfsburg Edition” appeared in ST-Computer 11/2002.

The Skunkboard was plugged into several consoles with alternate games, including the successful port of the ST classic “International Karate+.”

On the other hand, the “Jag in a Mac”, a Jaguar with a screen in a black-painted cube Mac case, remains a one-off. A new game ran on this Jaguar, which celebrated its world premiere at ejagfest.

“Arne – Hunter of the Jags” was one of several new games shown at ejagfest. Developer “Der Luchs” has also been programming for the Raubkatze since last year, after his previous games were released for the Vectrex. Ausweichmanöver, Absorbierer and Arne are visually somewhere between VIC20, ZX Spectrum and C64, but they are well playable and above all finished: there is no shortage of demos, announcements and ST ports, as is well known, so every finished Jaguar game is already good news. The three games are part of the “8-Bit Collection”, Luchs “threatens” with more titles. In addition to his homebrew games, he also sold his first audio CD, “Vectrax”.

Thomas Ilg is already known to readers of ST-Computer, on his “Anarcho Racer” European tour he also made a stop in Kleinenbroich. The Anarcho Racer ignores all traffic rules and cleans up by on-board cannon or by ramming. The game has grown so much in the meantime that several expansion discs have been created. Ilg currently rules out a boxed version due to the size of the game. Anarcho Racer runs on all original Ataris from the STE onwards, but it should be clocked at at least 16 MHz.

After several rounds of Anarcho Racer, it would be irresponsible to get back behind the real wheel without testing. P.I.T.S. was a training system for the German driving test and was written by Bastian Schick and Lars Baumstark on behalf of the DVPI at the time. A complete P.I.T.S. set, consisting of a transparent case, the module, a Lynx, power supply and instructions is rare and therefore got a place in the showcase at ejagfest.

The lucky owner of the case, Christoph Podlech, had another rarity in his luggage: the Amstrad Mega PC, a PC with a built-in Mega Drive with permission from Sega. The latter was housed on an ISA card and could not be used simultaneously with the PC. The system appeared in 1993 and was a flop – the PC hardware with a 386SX CPU was outdated and the Mega Drive card resulted in a higher price compared to other PC clones.

On the Mega PC, Sonic ran – as it did on the VCS 2600 in the gamer’s corner. Sonic on the VCS? “Zippy the Porcupine” is a Sonic-inspired jump’n’run from the “Princess Rescue” developer, proving once again that VCS developers never shy away from any title when it comes to ports. Zippy was one of the new homebrew games sold at the Gaming Expo in Portland. In addition, Wall Jump also reached ejagfest in time. Homebrew stands for quality on the VCS consoles in particular – at least for the games that make it into the AtariAge Store. Many of the games would have been unthinkable in Atari times, if only because developers rarely had a 32KB ROM available for their game.

Less active, but definitely present was the Lynx and Jaguar scene. Björn Spruck showed morphing on the Lynx and a level editor (PC) for Lynx Lemmings and Matthias Domin “Impulse X” on module and CD for Jaguar. Other Domin projects are “Mini Doom” and the brain game “Clicks”, which unfortunately is not yet finished. Also still a work in progress and already seen at ejagfest 2014 was EmuTOS for the Jaguar.

If Apple has its way, the old PowerBooks will only be used as doorstops. But with an alternative operating system, the PowerBook is spared this fate. MorphOS ran on the PowerBook, along with a beta version of Wings Remastered – with the blessing of Cinemaware, by the way, who are delightfully generous in licensing their titles for retro platforms.

No system has had as much work done on its display as the Nintendo GameBoy, whether by Nintendo or by third-party developers who wanted to add lighting to the handheld through adventurous-looking add-ons. Only the GameBoy Advance SP offered a convincing screen with simultaneous backwards compatibility to the classic GameBoy. Those who further prefer the latter can have it modded: DocMorbid offers mods and case paint jobs.

If YouTubers are making fun of the many buttons on a Jagpad, they haven’t seen the Philips G7000 yet. G7000 is one of the few consoles with a built-in keyboard and was a competitor of the Atari 2600. Philips even offered the console with a built-in B/W screen as G7200. The keyboard was used by the Basic module, for example, but also various educational games. The G7000 at the ejagfest belonged to Luchs – is he planning Philips games as well?

A few Atari 8-bit computers could not be missing at ejagfest. “Dimo’s Quest” and an early version of “Lost in Space” were on display.

Nick Harlow again made the journey from the UK for ejagfest and offered ST, Jaguar, Lynx and VCS games on his stand, as well as various other products. 16/32 Bit Systems also had various games from homebrew developers and Songbird on offer. There are no special prices for the ejagfest, but you can take the games with you right away.

The Dutch Atari Shop, run by an Atari-enthusiastic couple, is now active exclusively at events. They had brought a lot of merchandise, original games and homebrew.

It was almost a home game for the Cologne-based retro shop Retrospiel, which sold games for various systems and also offered some soundtracks.

One of the Lynx’s special capabilities is the ComLynx interface for networking up to eight consoles. The ejagfest is one of the few events where there are enough Lynx consoles and players to make use of it. So six consoles were placed on the beanbags, the beanbags were filled with volunteers and off we went with the European Championship in Checkered Flag.

After a previous practice round with Johannes Hädrich – he always has the ComLynx games doubled in his Lynx bag – we went into the preliminary round and luckily two players collided in the first round. This allowed me to comfortably zip around the circuit in fourth place for the rest of the race. Hädrich qualified for the next round with a third place, but he had nothing to do with the victory, because Sijmen Schouten took it, ahead of ThorN and Carsten. A total of 24 riders from Germany, England, the Netherlands and Poland took part. For Sijmen it was already the third European Championship title.

Multiplayer fun was also had on the GameCube in the “Mario Kart Double Dash” Funcup.

The organisers were satisfied, even if they wished more visitors had stayed longer and more exhibitors had been present on both days. A look at the summary on ejagfest.de shows why. A few hours are not enough to see everything and talk to every exhibitor. 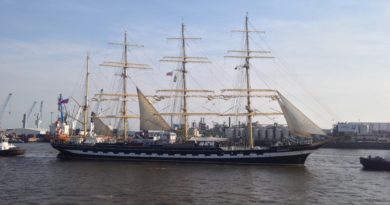 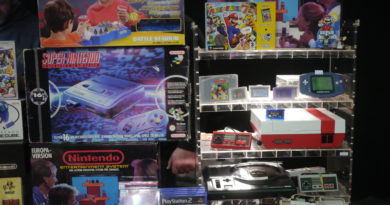 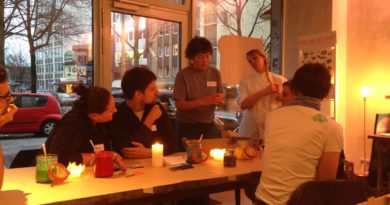 Pastry course at Zweimeilenladen: Chef for one day?